Are you ready to enlist Soldier?

Get your limited NFT battalion of Soldiers 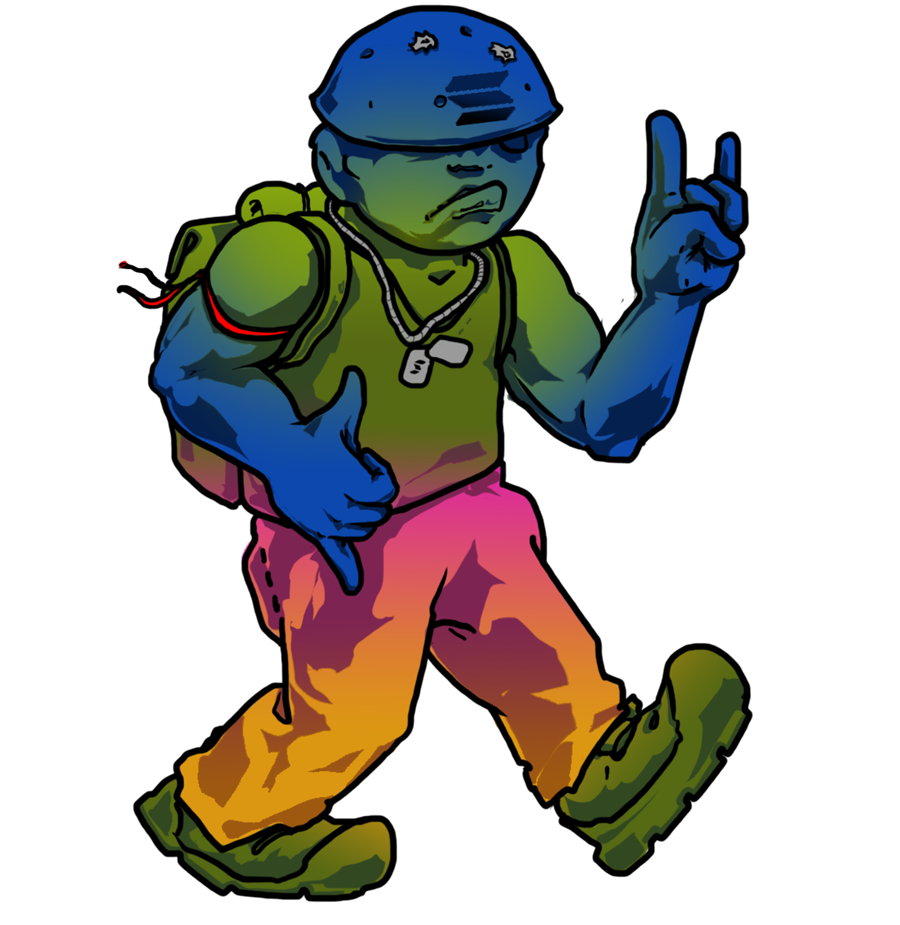 Solarmy is a limited battalion of 2D & 3D NFT Soldiers —unique digital collectibles living on the Solana blockchain. Your Soldier doubles as your Solarmy membership and grants access to Soldier-only benefits.

What is a Soldier 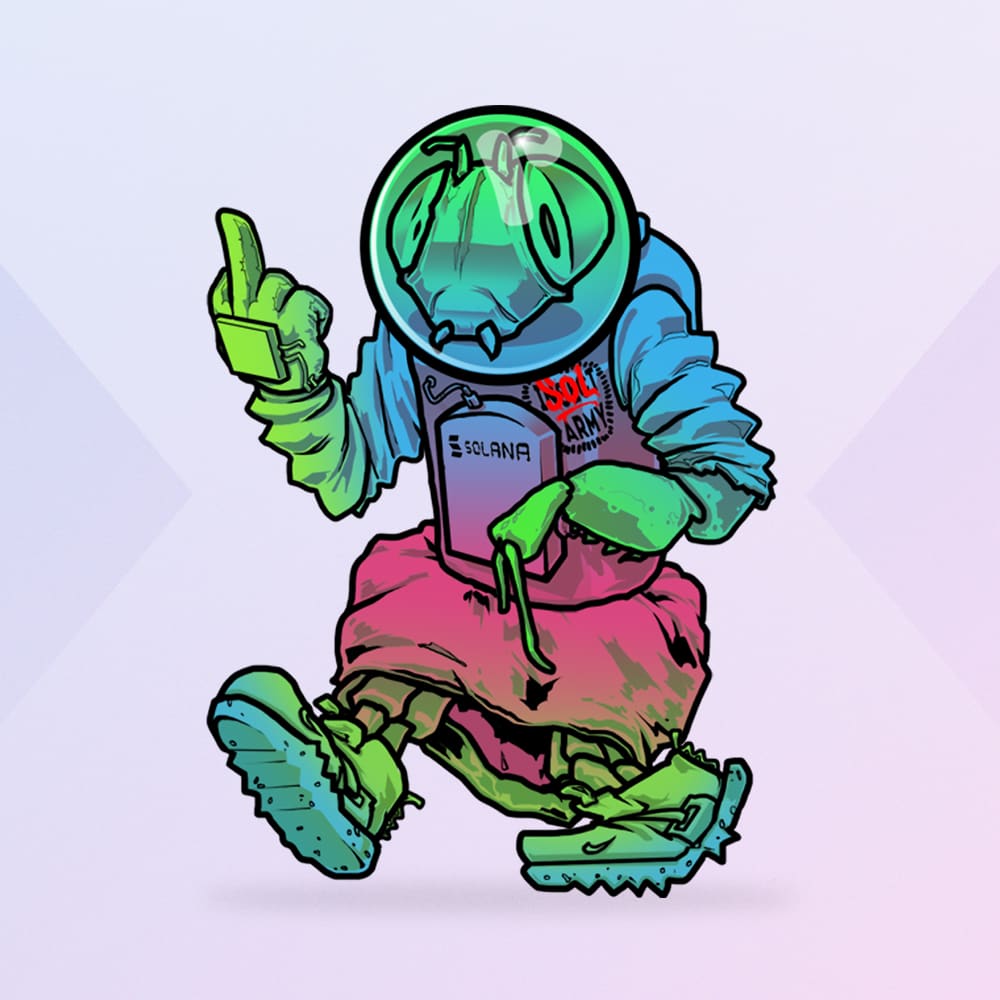 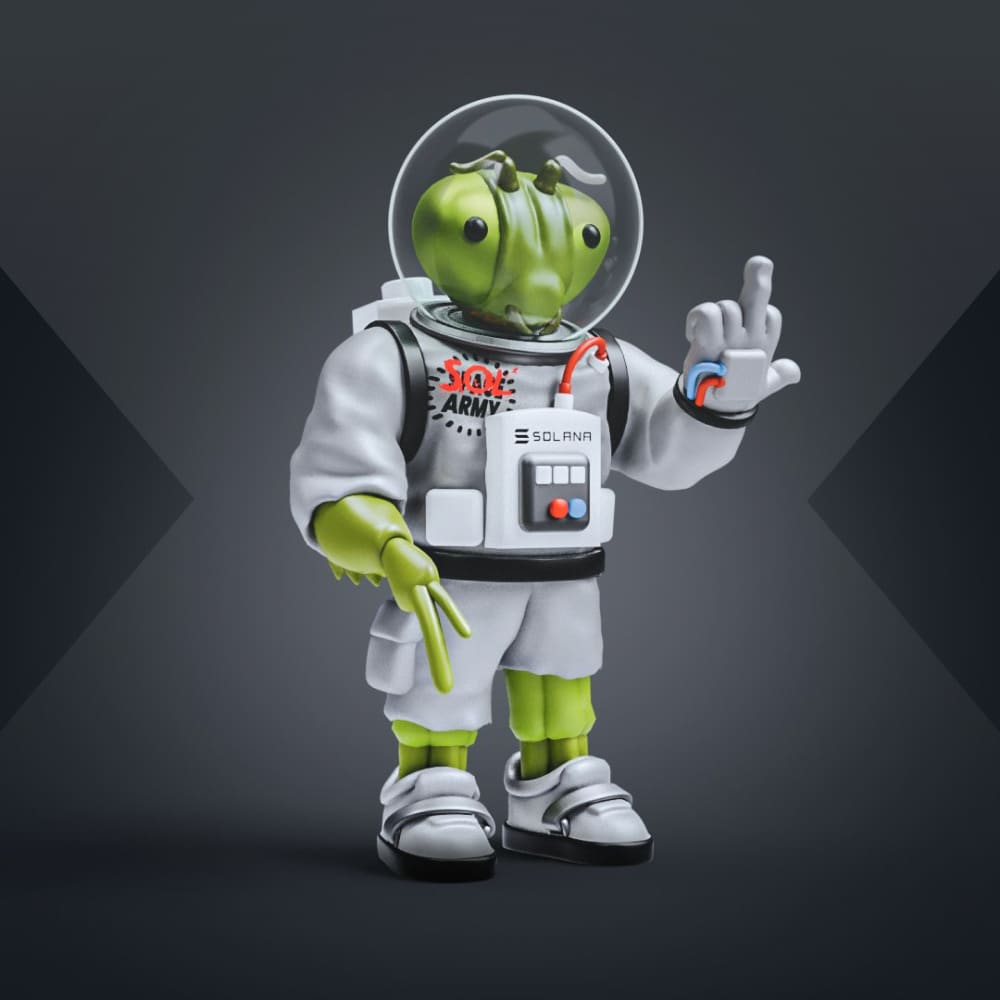 How are Soldiers made

Each soldier is made of many parts, including: A head - All heads will have different rarities and features Arms - With different gestures or weapons Legs - Different feet, different kicks Accessories - Weapons, hats, helmets, chains.
A background - These will vary by gradient, with rare exclusive environments Parts are assembled together, just like a toy soldier (GIJONE style)

We’ve decided to release both 2D and 3D Soldiers simultaneously because of how it will help develop the Solarmy further after the drop. Our 2D Soldiers will move towards future comic books and card games, while 3D Soldiers will eventually be animated (emote drops coming in the future) and metaverse compatible 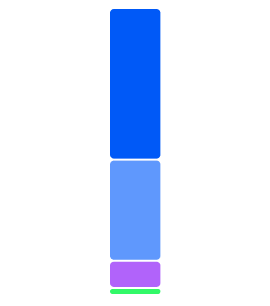 We agree to donate 5% of proceeds from the drop towards appropriate charities, specifically those that help veterans.
We will also be including an insurance fund for soldiers (33% of charity proceeds) who have been scammed and had their wallets hacked. Soldiers support soldiers. It is important for us to support our community. We are open to suggestions on this.

Everyone who participates in the drop will received a randomized 2D or 3D soldier.

The package will include either a full scale image of your 3D soldier or a full scale image of your 2D soldier. You will not be able to choose 3D or 2D, for example: You may receive a 2D Mickey Nullrank or a 3D Space mantis. We love the mystery in this and we believe it will be a catalyst for the secondary market. We will be dropping 9999 soldiers, 4999 2D, 4999 3D and 1 ultra unique soldier. This means only 9999 people will get into the drop and will receive 1 limited soldier NFT in 2D or 3D. 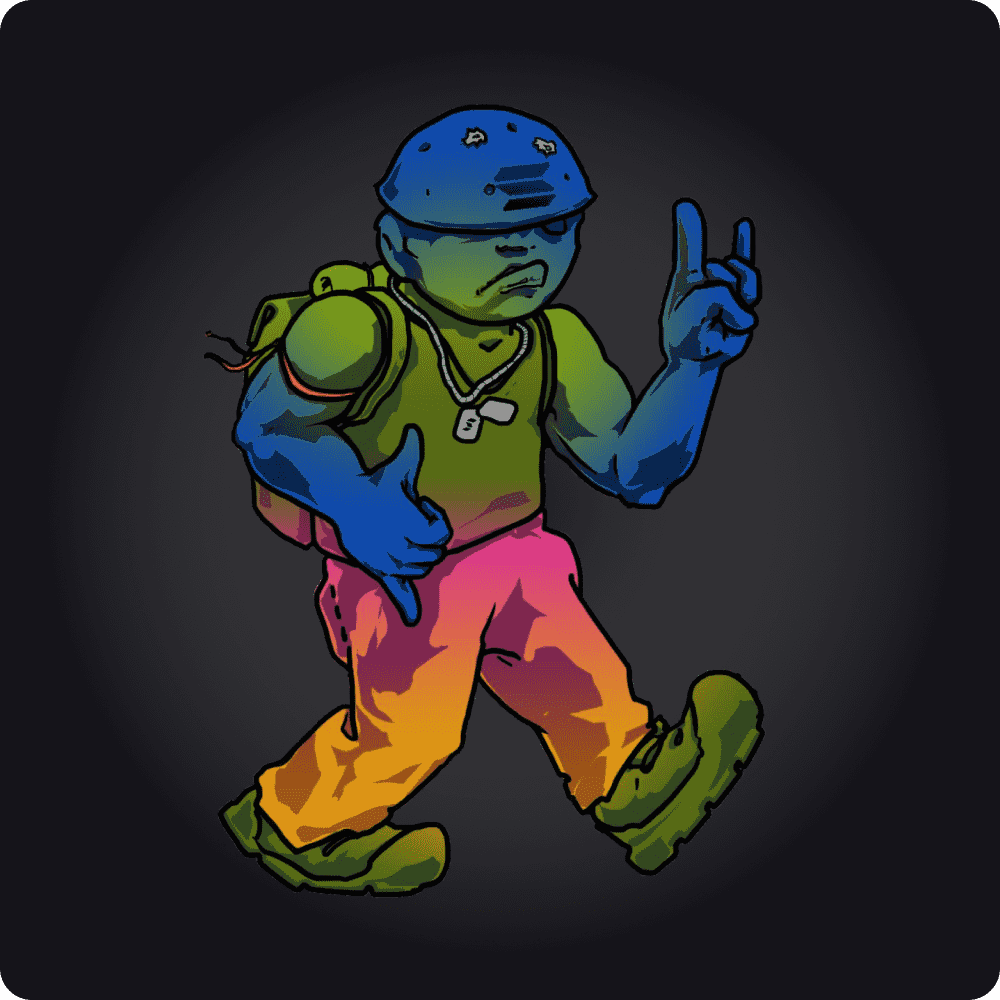 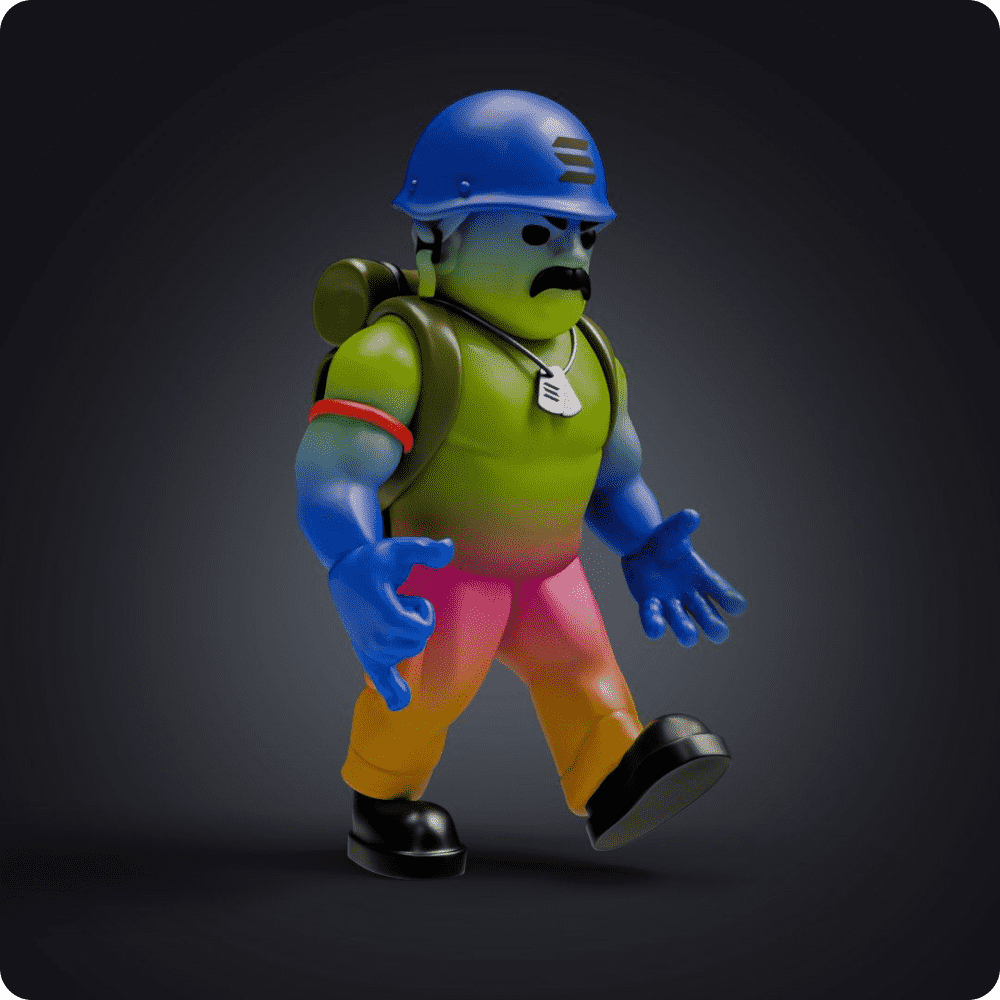 Mickey Nullrank. A blind human stuck in the trivialities of life. The system had trapped him into believing there was nothing more than working to pay the bills. On a fateful morning in the city of Kyiv on planet Earth, his existence was ripped away from him when he stumbled across what we know today as the solcrystal. The cathartic experience left him questioning all he knew, and he sought out a new adventure, expanding on avenues he previously thought dangerous, but now understood to be freeing. Along this path to enlightenment he caught the attention of a somewhat powerful general in the SolArmy. Fast forward 176 years and a whole lot of learning, he now fights on the front lines with many seeking the same thing as him, absolute freedom.
‍
He comes from the City of Kyiv, so imagine old European style buildings but very unkempt. Dirty, but safe. A lot of street art and graffiti. A city stuck between modernising and embracing its history. 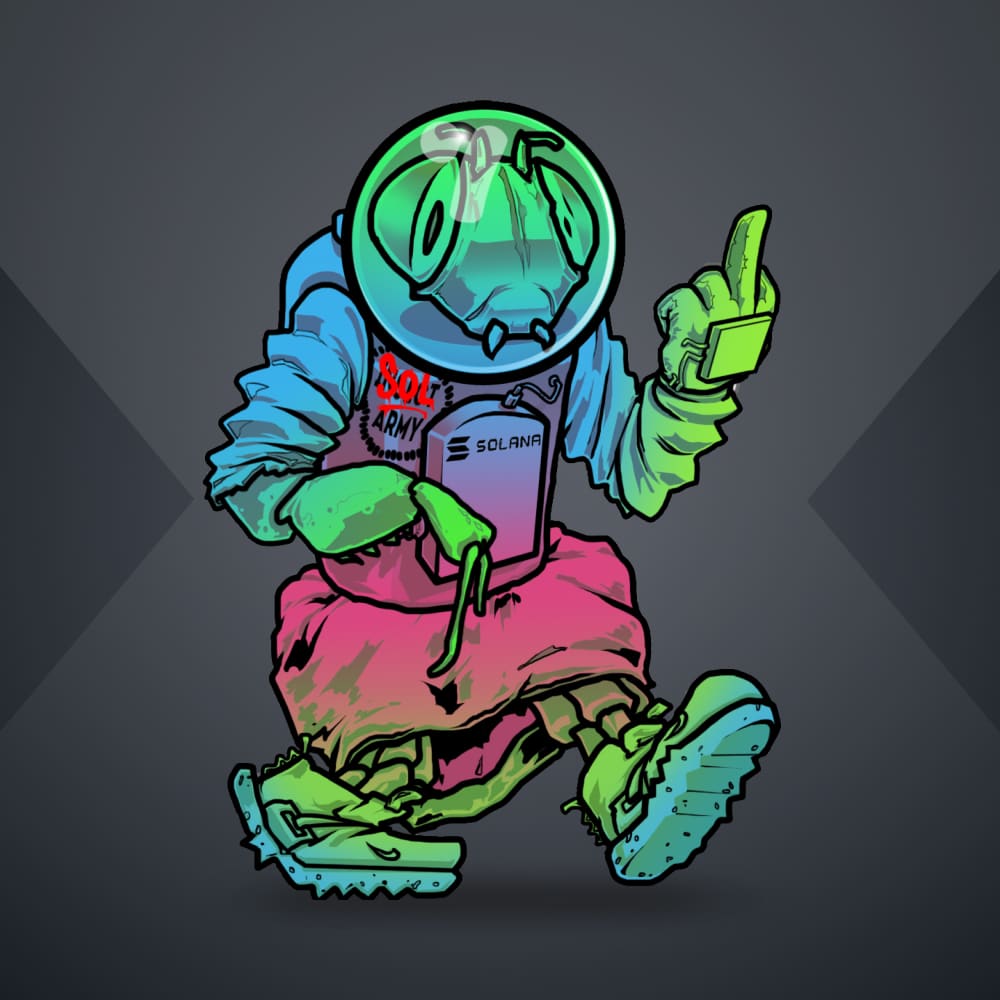 The mantis species are said to be one of the oldest in the known universe. Hailing from a planet much like the rainforests of earth, this species has managed to thrive for millenia thanks to their intuitive and insightful natures. Dyaka has long forgotten his own history, but the lessons learnt along his journey have been engraved deeply in his psyche. His peaceful nature and out of the box thinking always lead to unique solutions on the battlefield. Do not mistake his gentle nature for weakness, his cunning stealthy skills are force to be reckoned with, and an asset on every battlefield.
His home planet is lush thick greenery, much like rainforests. Everything is larger than life, overgrown. The mantis is the apex predator on this planet. 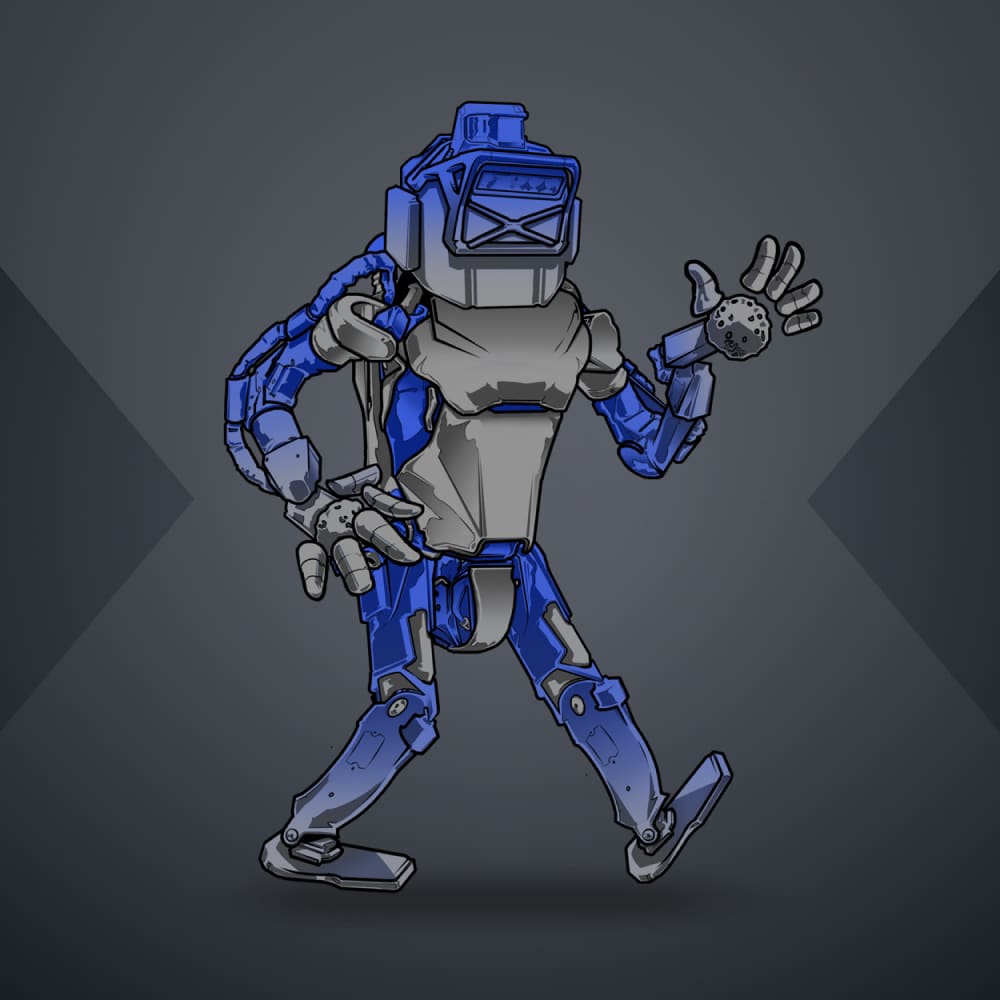 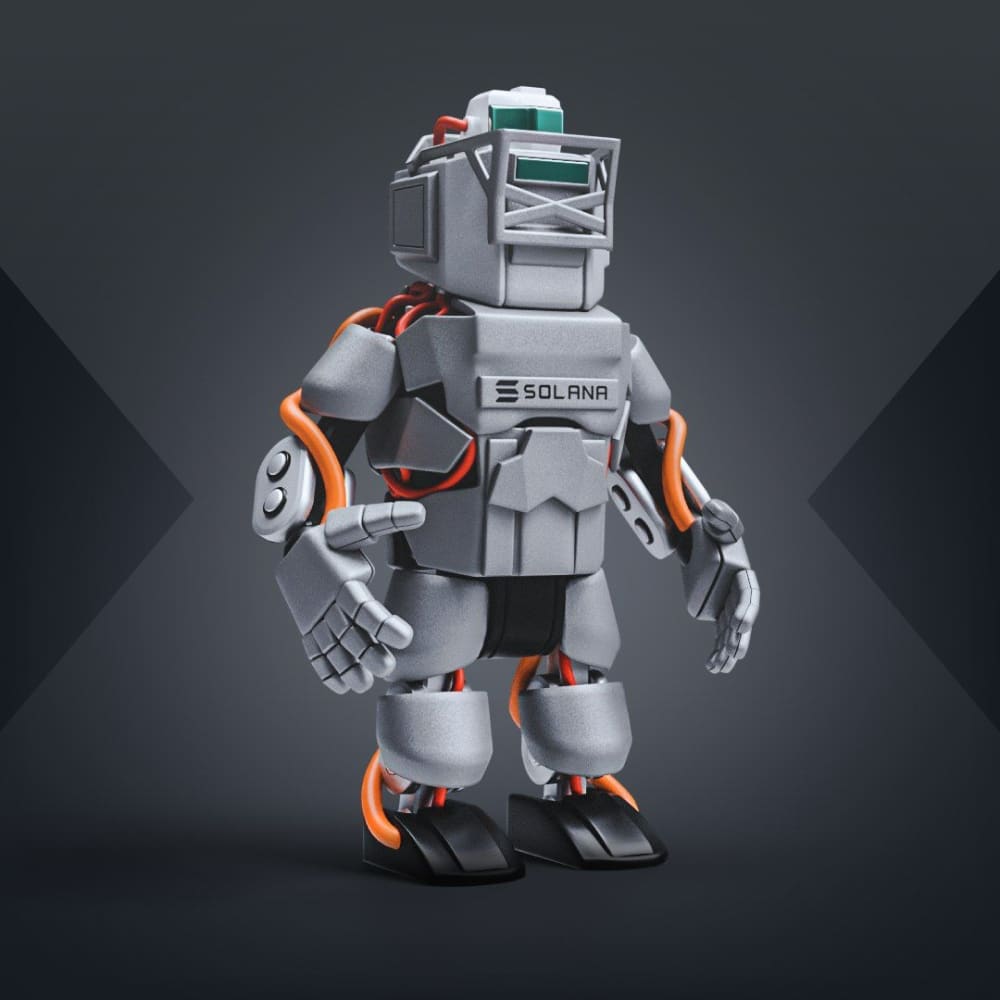 Violence, gore and bloodshed. This SOLdier has the darkest past by far, growing up in the underworld can do that to you. Was he born or was he created? A question that may haunt us all, but seems to hit a little different when every piece of you can be manufactured. The underworld is not of this universe, or even this dimension. Access is nearly impossible, unless you possess the right token. Eris was sent on a quest by the devil himself, time may be running out, but even Eris can’t know for sure how much he has left. Will the SOLarmy be his salvation or his demise?
After the ASIC chips became the chipset of choice amongst robots, Rusty and his GPU based system became outdated. A massive breakthrough helped the Solarmy tap into this older tech which is why Rusty has become such a prominent figure in the Solarmy.
His home is quite literally hell. Screaming souls, fiery pits, demons etc. Yet he is the only robot, and it seems he has always been there. There must be some kind of magical element protecting his hardware from the flames. He is deeply troubled by the questions of his origin. 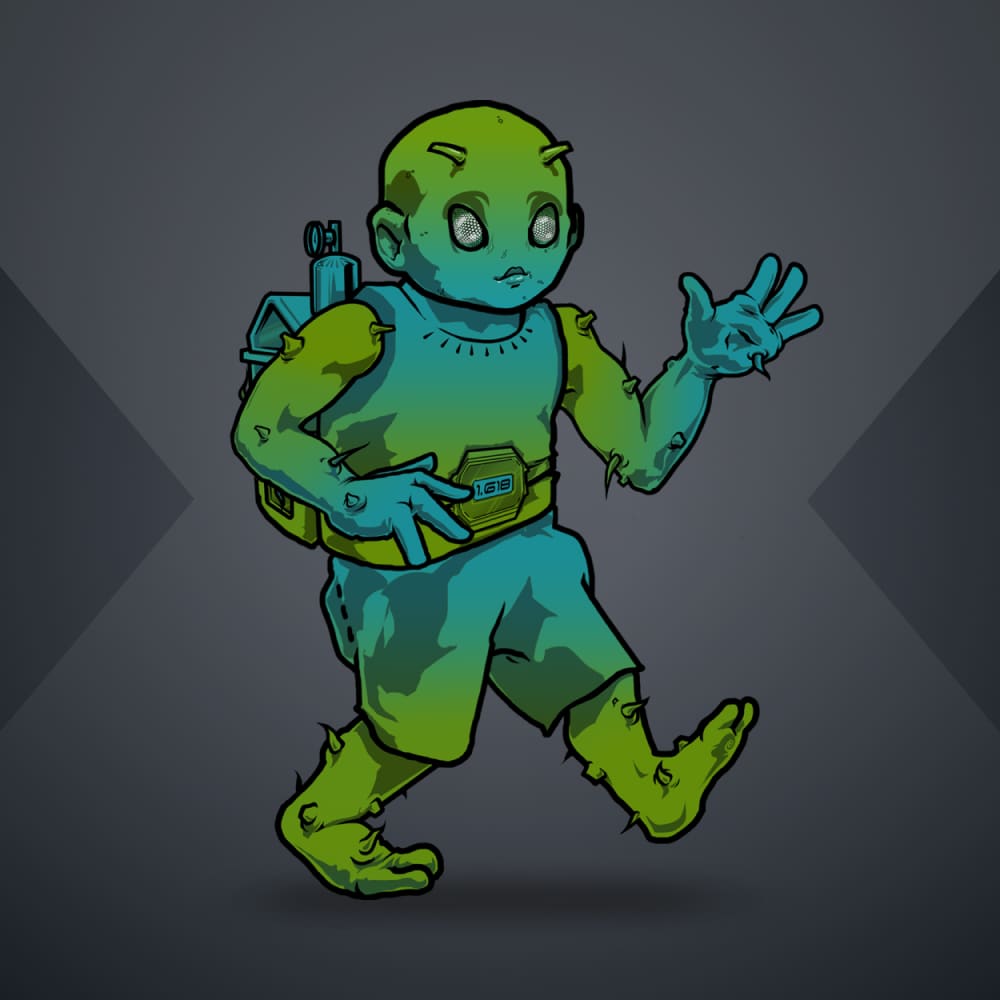 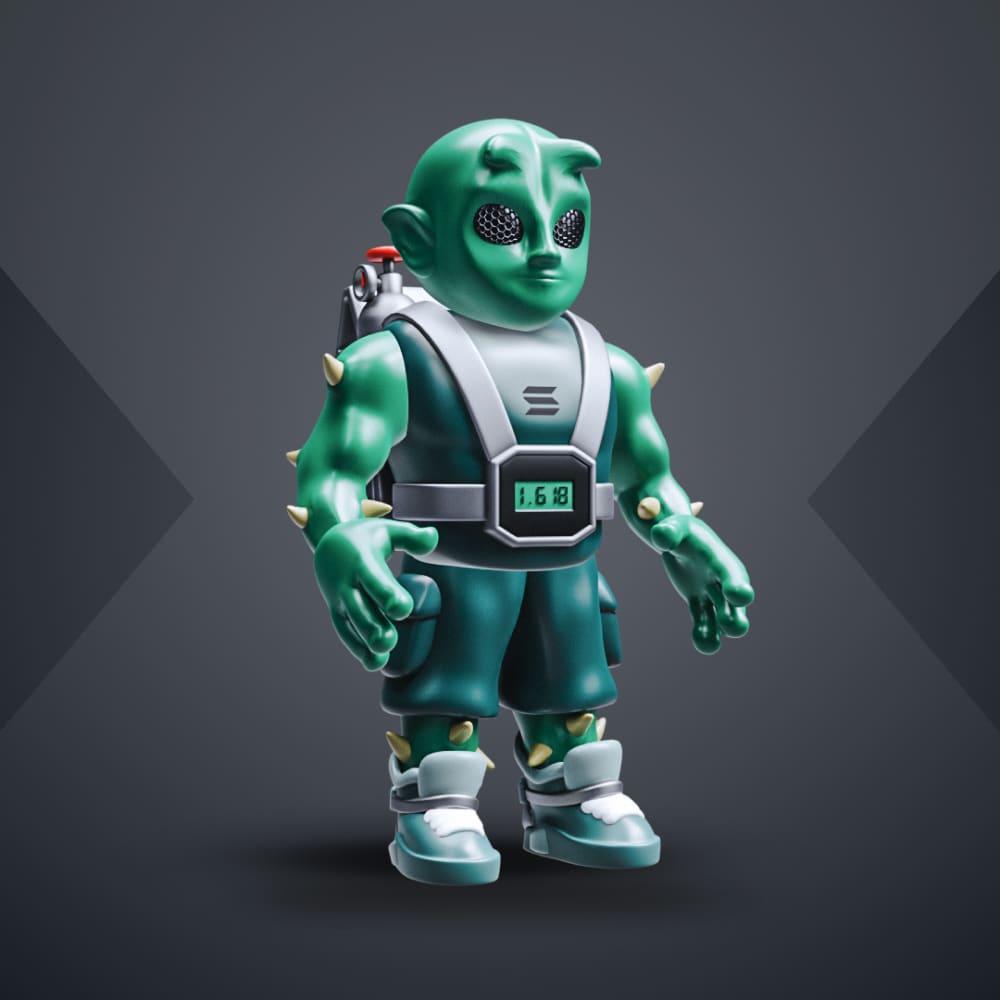 Some people, or beings, constantly find themselves in the wrong place at the wrong time. The same could be said for Ajali, yet things always seem to pan out. Ajali was sold off as a child to a time traveller. Whether this set him up better or worse in life is completely up for debate, but it did allow for him to develop certain skills otherwise inaccessible to others of his species. While growing up he learnt the art of time manipulation, allowing him to travel and jump between places in a seemingly impossible way. He was later recruited to the teleportation regulations committee. He soon realised his talents were wasted, and after getting stuck in a time loop that nearly drove him insane he found the Solarmy where he’s helping them perfect their proof of history technology.
As a child of constant travel we can picture his home base something like that of a space ship. Always in a different galaxy, planet or system, the only constant is his own mind, even that can be fleeting. 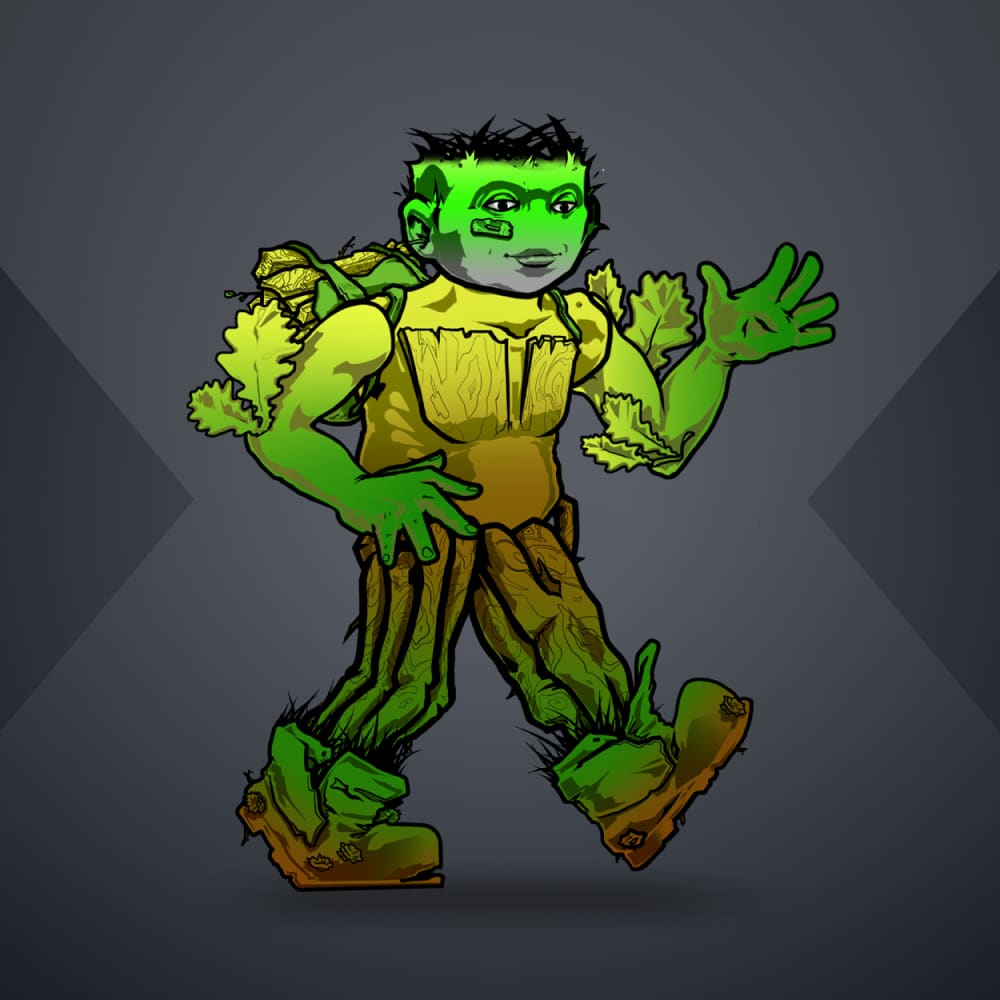 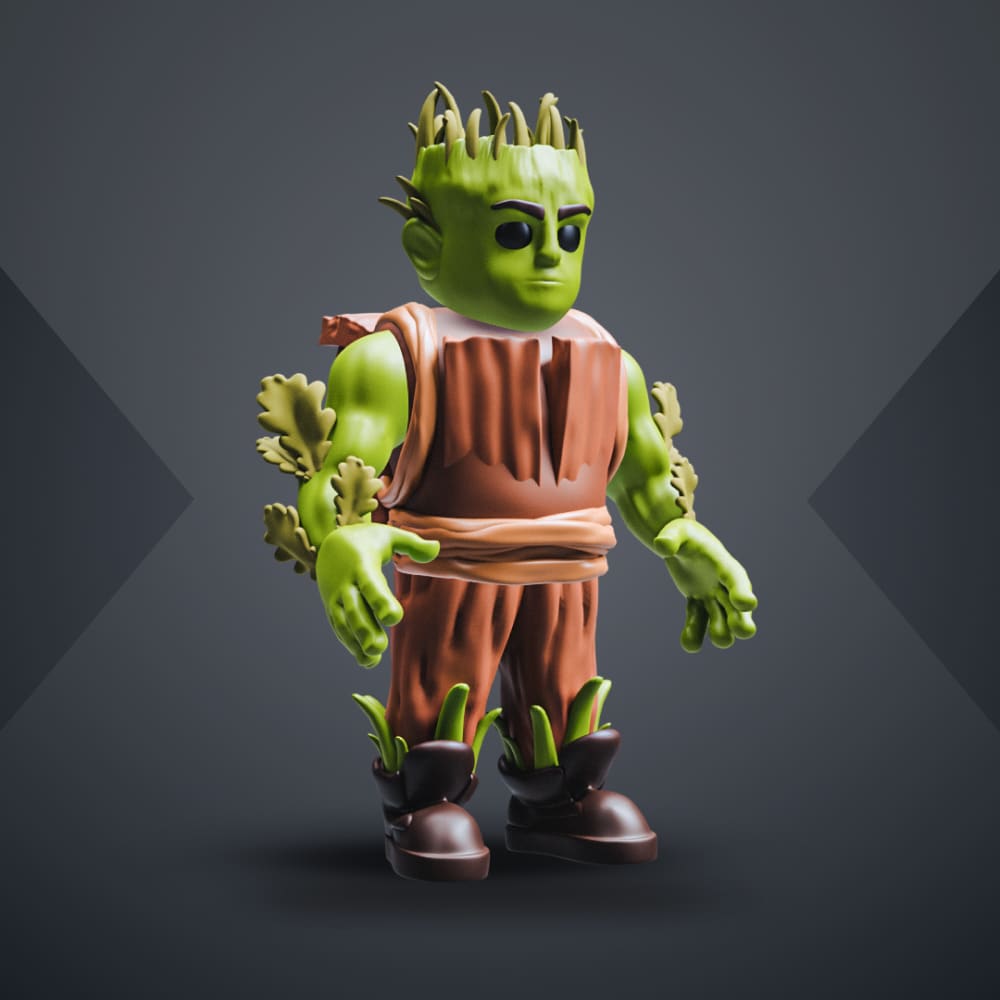 Once considered a god of his realm (Otto), Jars lived for millennia before he decided to relinquish (most) of his godly powers. Storing them away for a rainy day, he endeavoured to pursue a life less complex, but far more challenging in how problems were to be solved. He can always be found with his golden shield rumoured to contain what’s left of his supernatural abilities. Experiencing life as just an “ordinary” he now puts his talents to use on the battlefield, providing care for those in need. Be it physical or psychological healing, Jars will provide.
‍
Home planet akin to Asgard. Very modern in appearance, but medieval in rules, dress etc. Citizens worshipped and prayed to Jars, in return he offered fertility and growth to the land. Once he stepped away, he was replaced by another being that entered through a wormhole. There was no conflict, rather just a natural order of how things were to continue forward.

‍All NFT holders will have access to the Solarmy Barracks, only accessible with their NFT -  through Grape Protocol.
‍
This will include:
‍
- Progressive Solarmy comic book, NFT holders will have their say in the narrative through our Soldier NFT Trading Game. See the video below
- Merch drops (1st drop - BUILD-YOUR-SOLDIER fridge magnets)
- Futurariams, create the environment your soldier will exist in. This is a user-generated project.
- To stimulate the solana ecosystem, soldiers* are rewarded with airdrops (tokens and NFTs) of the projects that the Solarmy has partnered up with.
*The % each soldier acquires will be based on their rank within the Solarmy and their badge count.

Our first step is to launch the Solarmy.io Battlegrounds Solana NFT Trading Game

Game launch - Your soldiers go to war and we start the Solarmy DAO.

Merch boxes - The first drop will be BUILD-YOUR-SOLDIER fridge magnets for every Soldier owner.

Who are the Soldiers?

The Solarmy is an interdimensional freedom fighting army of the future where all members are connected to each other through a high tech implant. Depending on the task at hand this chip maintains their free will, while also making it easier for all of them to enter a mind meld where they all work in unison. Soldiers all have their specific roles but the army has little to no hierarchy because the chip implant allows all soldiers to reach a consensus that’s always aimed toward the higher good of all beings.
No one knows who started the solarmy, but it doesn’t matter because everyone in it is treated equally. Anyone is allowed to apply to enlist, but there is a rigorous application process to make sure all new soldiers are ready to live a life where all their decisions are transmitted through all implant network for all other soldiers to see. By sacrificing their privacy, they ultimately benefit the greater good of the whole.

We have decided to use full scale soldiers (And not the standard portrait style NFT’s) for various reasons:
1. We are following an action figure style build on our soldiers, this means we want to have interchangeable parts for all the body parts (Think barbie).
2. We want to do something different to what has already been done many times over. And of course, we understand the PFP importance so a PFP will be included in the drop package.
3. Our soldiers need to exist in the metaverse, this requires both a full body and a 3D body.
4. Accessories and weapons are important, you need hands to hold weapons and you need killer kicks to march into war.

We will be running limited auctions every week leading up to our launches. These are very limited 1/1 soldiers with special collaborations and accessories.

How do I join the Solarmy?

Buying a soldier will get you into the DAO (once it's ready) and a special role as sergeant on the discord. This will allow you to have a say in the future of the soldiers.

How can I contribute?

Recruit soldiers post memes and have your say in the direction of the Solarmy. Join them in on discord. 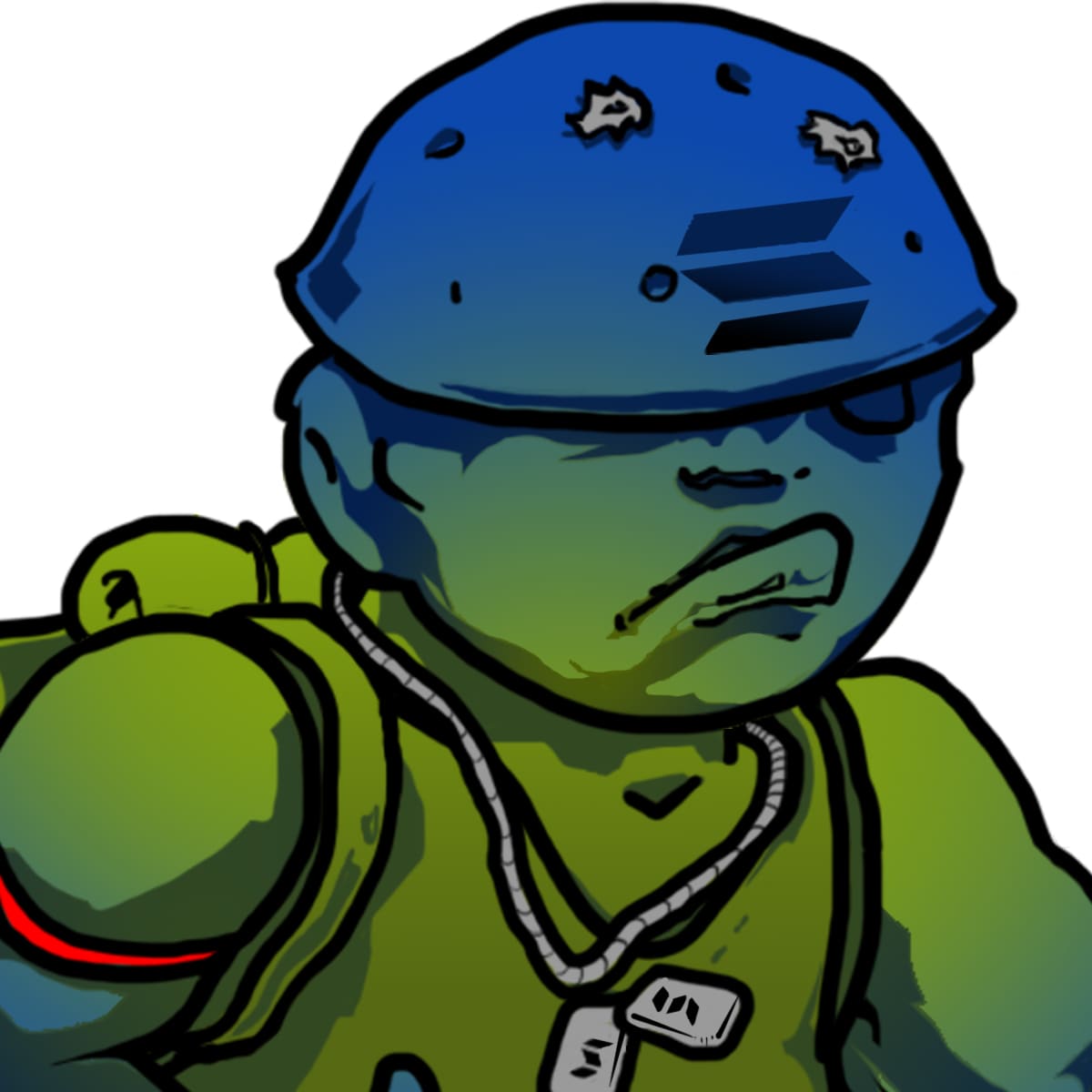 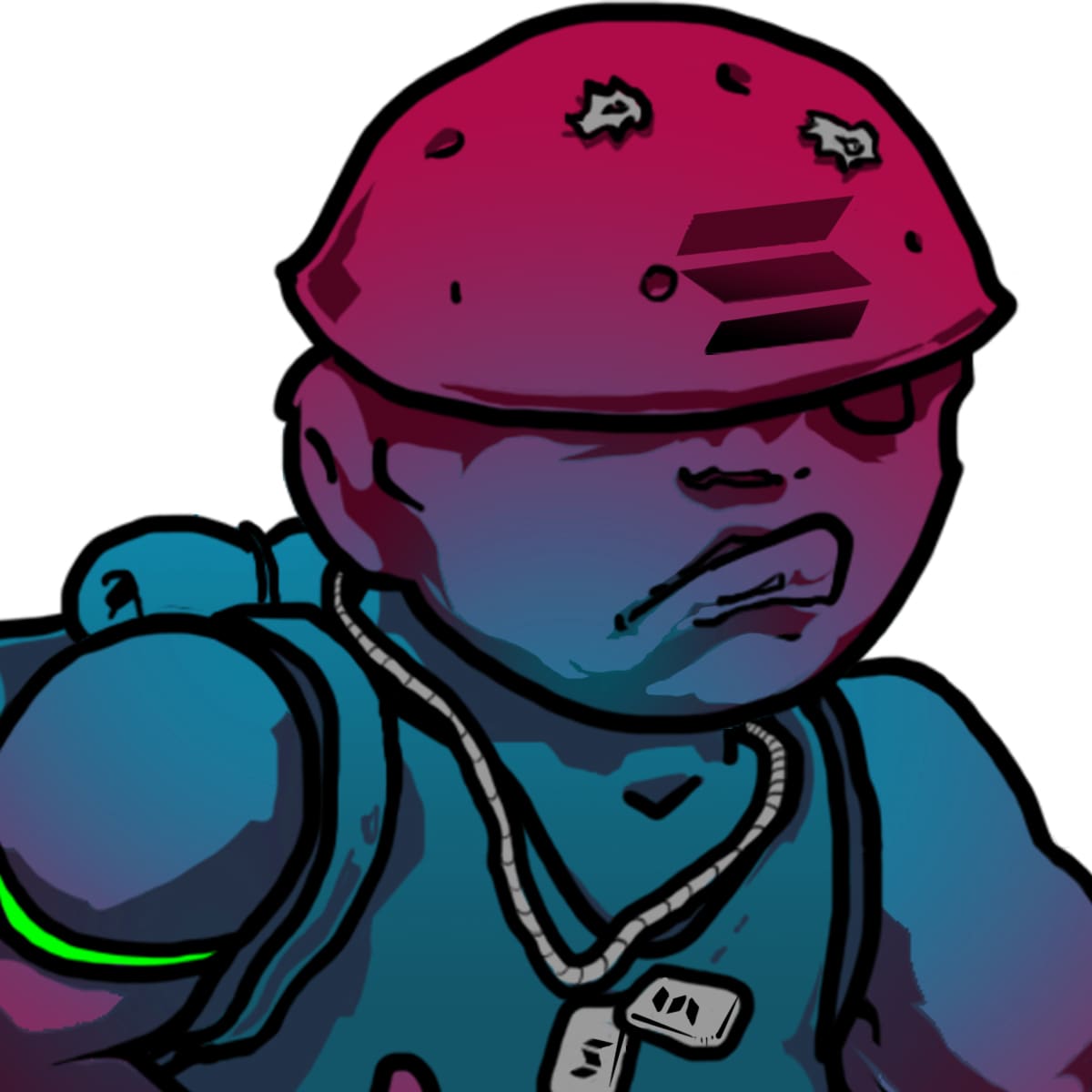 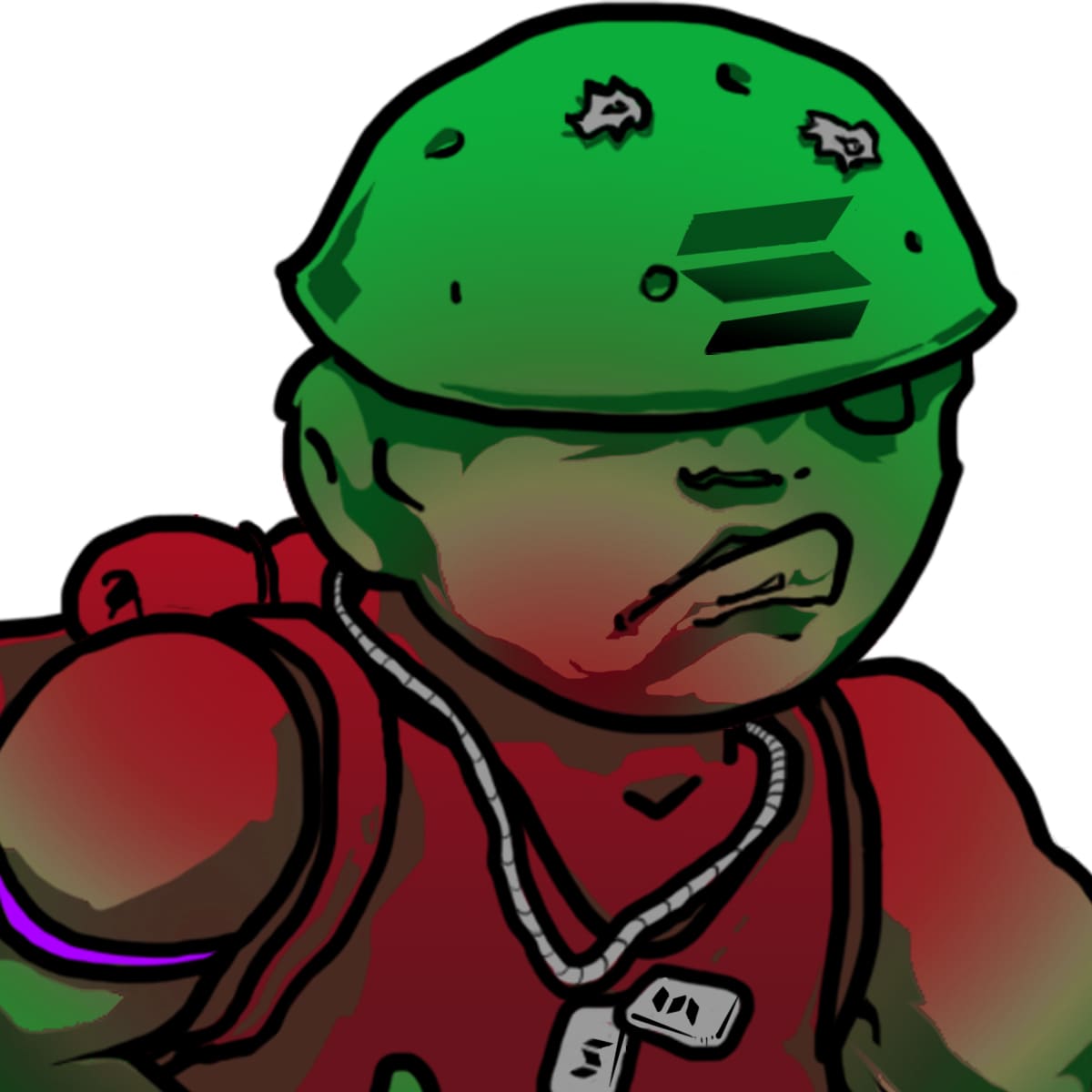 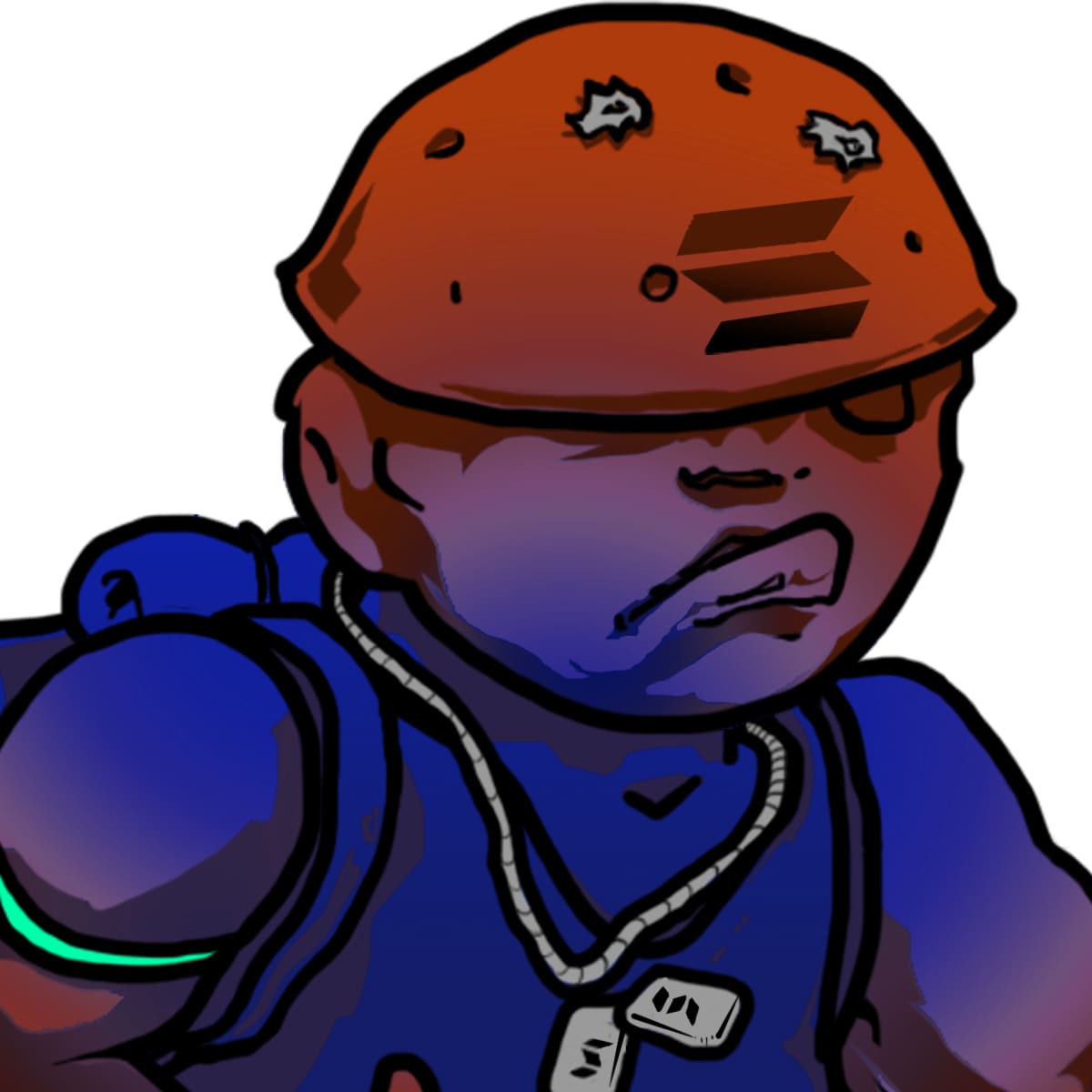 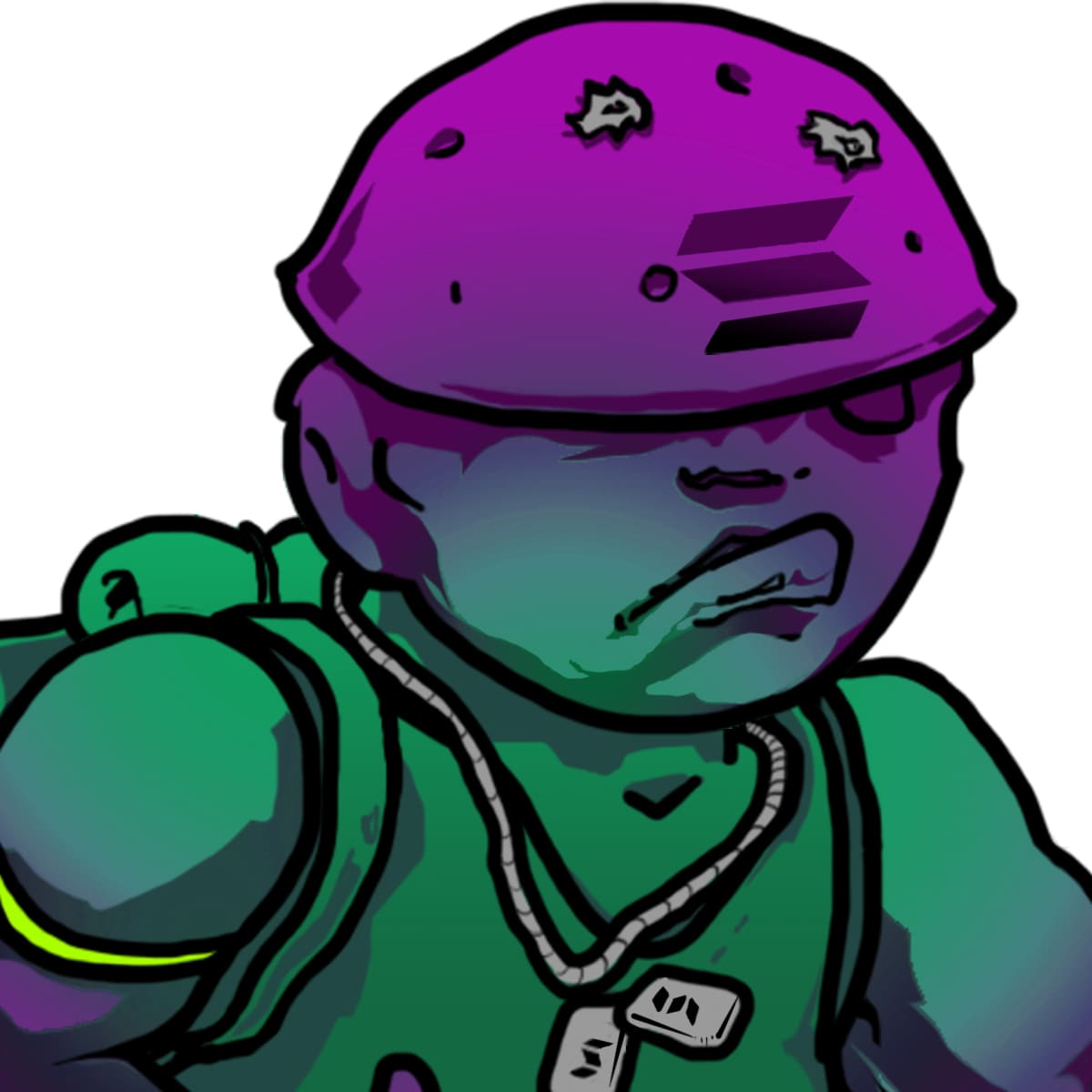 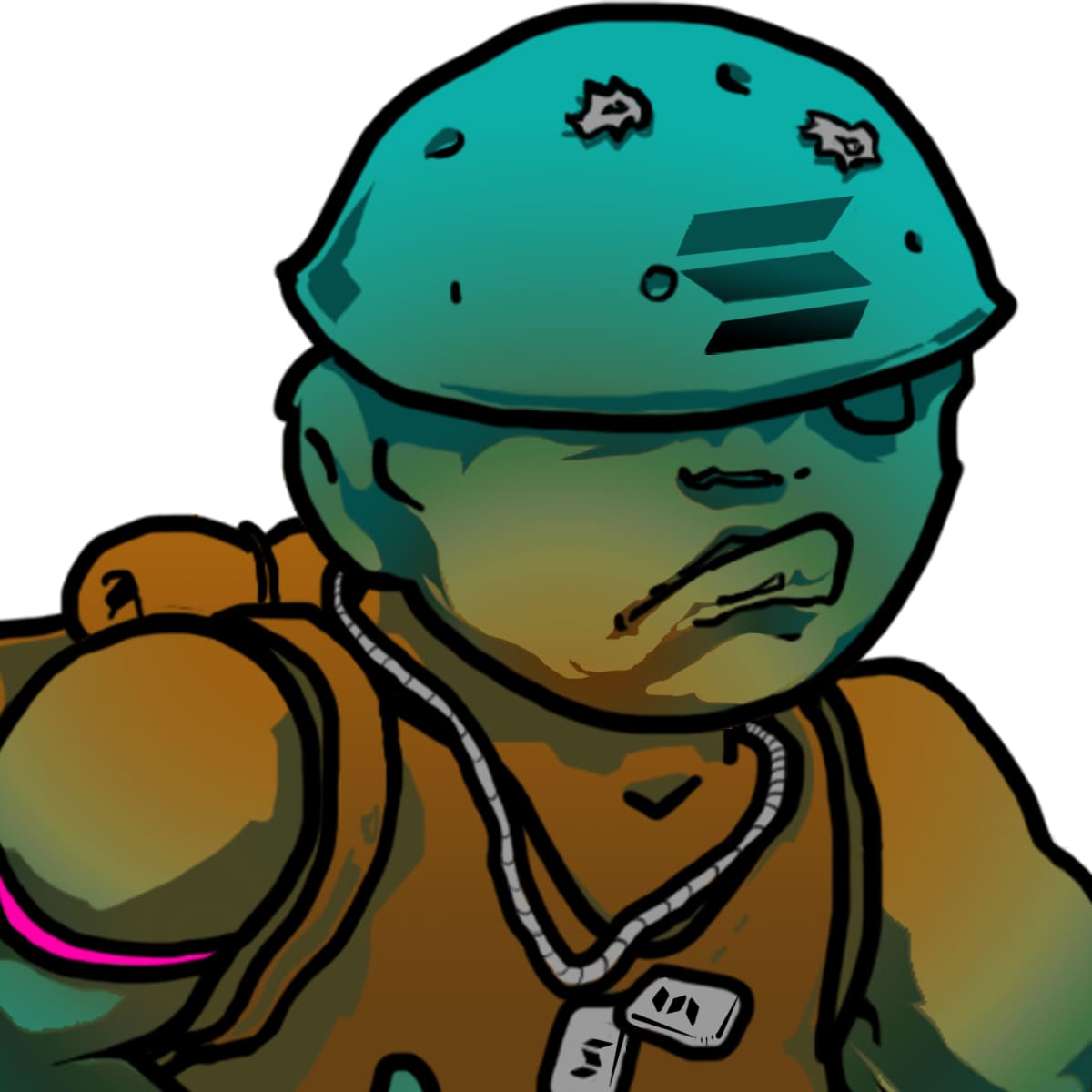